Following two sensational videos in 2013 featuring customers getting more than they bargained for during a Clio test-drive, Renault has turned its attention to the recently launched ZOE electric supermini with the release of a brand new film. However, as with the Clio videos which have now attracted over five million views on YouTube, all is not quite as it may seem. 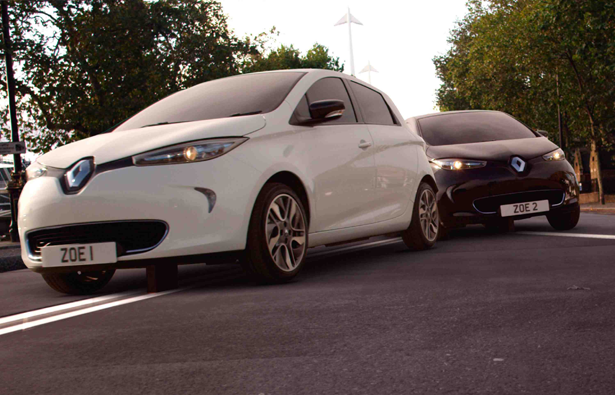 Electric vehicles are no strangers to motorsport – either in full-size racing, as Renault will show with its partners in 2014 with the FIA Formula E championship, or in miniature in the form of the ever-popular skirting-board scarring Scalextric models.

Drawing inspiration from these two ends of the spectrum, Renault’s team hatched an idea to take things one step further and race two full-size ZOEs on a Scalextric track.

And where better for the challenge to take place than against the iconic background of central London? Instead of the usual plethora of exotic supercars, sports and rally cars used in the famous pocket racer formula, viewers will see Renault revamping the underpinnings of its electric supermini to meet the challenge. Compact, stylish, not to mention swift, with instant torque and a 0-31 mph time of only four seconds, its flagship electric vehicle lends itself perfectly to urban racing.

It’s even perfectly weight distributed, thanks to its batteries housed directly under its core, doing away with the need for even Scalextric’s trick Magnatraction™ system. Among the alterations shown in the film was a reworked undercarriage, including the fitting of specially-designed braids, keeping ZOE on the track, as well as an aerial to enable the car to be remotely operated from the sky.

In the three-minute long film, viewers get to see the track being prepared at night, set for race action early the next morning. At dawn, two lucky online competition winners take flight in a specially chartered helicopter for the occasion to pilot their real-life ZOEs, obviously, complete with their own “throttles”. The race sees the white and black ZOEs do battle along a 1.9-mile specially created track.

Taking in several landmarks along the way, it starts at the London Eye on Southbank, it takes in Westminster Bridge and the Houses of Parliament, onto Embankment and The Strand, back over the River Thames, this time across Waterloo Bridge, then the BFI London IMAX cinema in the lead-up to the finishing straight alongside the River Thames.

Commenting on its latest bold marketing initiative, Renault UK Marketing Director, Phil York, said, “We really wanted to create something attention-grabbing for our electric vehicle range. Given our passion for motorsport, particularly in Formula 1, and the benefits of electric models in urban areas, racing our flagship model around the streets of the English capital was a perfect scenario. ZOE is eye-catching, cheap to charge, London Congestion Charge exempt, as well as free from emissions and pollutants in use.”

The creative for Renault’s latest production was undertaken by Scorch London and planned by MG OMD, with supporting assets from Publicis. The video went live on YouTube today at: http://www.youtube.com/watch?v=DITjqRmZ7JA
Details of the launch date, range and pricing for ZOE in Ireland will be confirmed early 2014.