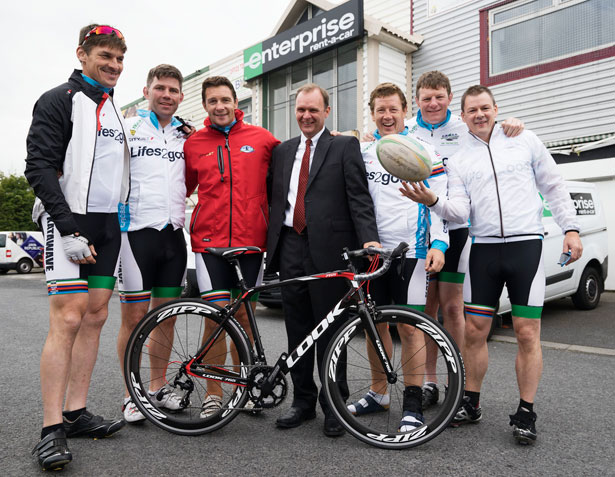 Led by former Ireland International and Lions Player Paul Wallace, the Atlantic 1000 cycle, now in its fourth year, kicked off on Saturday, 5 September in Skibbereen and will run until Friday, 11 September. Rugby greats from both hemispheres have joined 200 cyclists to cover 1,000kms across the Wild Atlantic Way to raise funds for CROSS Charity to support cancer research at Trinity College in Dublin.

As the official car partner of the CROSS Atlantic 1,000 Cycle 2015, Enterprise Rent-A-Car provided two pace cars which are leading and guiding the peloton throughout the tour as well as a number of support vehicles including paramedic cars and rugby legend shuttle cars.

Ahead of the visit, Enterprise Rent-A-Car group area manager, Richard Mahon and Galway assistant branch manager, Kelly Pollack, participated in the Lahinch to Galway leg of the tour, cycling a lengthy 110km passing some of the Wild Atlantic Way’s most beautiful scenery.

Commenting on the initiative, George O’Connor, managing director, Enterprise Rent-A-Car Ireland said: “We are delighted to welcome Paul and the Rugby Legends to our Galway branch today as part of this brilliant initiative in support of a very worthy cause, the CROSS charity and cancer research in Trinity College Dublin.  The Wild Atlantic Way is fast becoming a focal point of interest in Ireland for not just tourists but natives alike, and Galway is just one of our eight local Enterprise branches dotted along the scenic route. On behalf of all my Enterprise colleagues, we look forward to leading the cyclists as they continue north along the beautiful west coast of Ireland finishing their journey in Donegal on Friday.”

At the Galway Branch visit, Paul Wallace, patron of CROSS said: “After our 110km cycle yesterday with Richard and Kelly, it’s great to be visiting the Galway branch today and meeting their team. It’s great to have Enterprise Rent-A-Car on board this year leading us on our 1,000km journey from Cork to Donegal. They have been a shining light, literally, leading the cyclists from the start line in Skibbereen, and rousing excitement amongst the local communities where we are met with warm welcomes as we pass through the towns and villages along the iconic coastal route.”