From 0 to 238 mph in record time: a Top Fuel Bike is one of the fastest accelerating vehicles on two wheels. Motorcycle drag racing professional Ian King, of King Racing, counts on paints from Spies Hecker for his Top Fuel motorcycle. 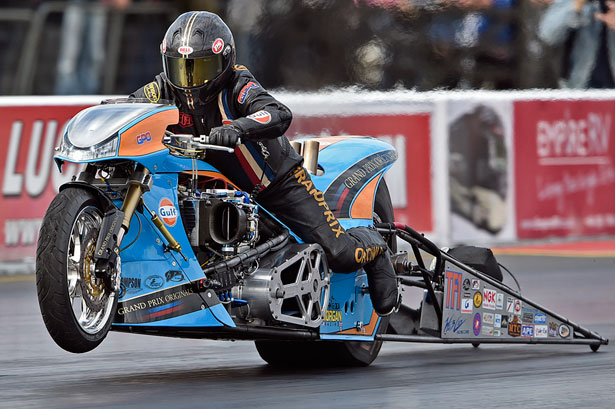 They are lightning fast and very powerful: a Top Fuel Bike’s four cylinder purpose-built engines are super-charged and fuel-injected, and they boast up to 1500HP, more than a Formula One racing car. In a normal drag race between two bikes over a quarter or eighth of a mile, bikes will reach speeds of over 235mph in around five seconds, which exerts around 3.5G of force on the rider, and the machine. This means the demands not only for the rider, but also for the coating on the bike, are exceptional.

For Ian King, rider and Team Principal of King Racing, the choice was easy. “The aluminium bodywork of the Top Fuel Bike is put under severe stress during a run. The chassis moves, stretches and vibrates, so the coating must adhere to the aluminium while resisting cracking and lifting. The coating must also have high impact resistance and must not react with nitromethane, the explosive fuel used to run the bike. “It is extremely aggressive to normal coatings, so very good chemical resistance is essential,” he says.

King, who has been European Top Fuel Bike Champion eight times and is a former UK Top Fuel Bike Champion as well as Irish Drag Race Champion, had tried several different paints in his 30 years on the circuit. He was introduced to Spies Hecker by renowned Austrian airbrush artist Knud Tiroch, who paints King’s race bike.

King says, “Through my association with Grand Prix Originals and Gulf Oil International I was put in touch with Knud, who is well-known in motorsports for his skills and artistry. I had seen a number of custom vehicles he had worked on – he is a magician with paint. Knud recommended Spies Hecker, and I am so happy he did. It delivers everything we need it to, and the colours are outstandingly brilliant. They are extremely resilient to the usual wear and tear that a race bike suffers during a hard season, both on track and being transported around the world.”

Drag Racing has its beginnings in the 1920s in the USA, when Hot Rod car races on main roads, known as drags, took place. The races evolved and were carried out with motorbikes. In the 1950s, the National Hot Rod Association was founded and established safety rules for the races.

“Today, drag racing is a sport for highly technical vehicles of different categories and controlling the tremendous forces on the bike during a race, requires a good deal of experience and a vast amount of courage,” King says. He hopes 2015 will be a year to break records again. “At the moment we are considering our options for the 2015 season. We have many fans in the USA, Australia and Europe, so we would love to take part in every championship.”

For more information on drag racing and on Ian King, visit www.kingracing.com or for further information on Spies Hecker products please visit www.spieshecker.co.uk.
demonstrate its partnership with the refinish industry. Based in Cologne, Germany, it is one of the world’s leading vehicle refinish brands, and is available in over 76 countries worldwide.