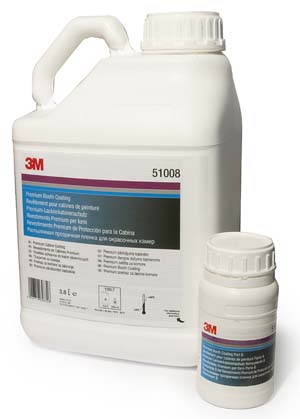 A water-based, two-component sprayable masking film, Premium Booth Coating by 3M is coloured purple on application to ensure complete coverage and overspray resistance, then dries to a colourless film which can easily be peeled off. Unlike many standard products which remain wet or tacky on the walls of a spray booth, Premium Booth Coating dries to a smear-free finish ensuring continous protection. Additionally, while other coatings may require pressure washing to remove, the new 3M product is fully peelable, reducing potential removal time from four hours to 1.5 hours.

Daniel Fletcher of the Automotive Aftermarket Division of 3M explains: “Customer feedback has shown us that around 40 per cent of bodyshops rely on clear masking film to cover the walls of their spray booths in frustration at coating products which claim to be peelable but are time-consuming to remove. Premium Booth Coating from 3M is far faster to remove and negates the need to introduce water into the booth for cleaning.

“The coating can be used on glass and light fittings for a seamless finish and, due to the speed and ease of removal, vastly increase booth productivity.”

Sprayed on using a standard primer gun, Premium Booth Coating should be applied in two stages, allowing the first coat to dry fully before baking on a second coat at 80ºc.