The twelve photos of the new True Stories Standox wall calendar play on a topic that appeals to the imagination of all ages – the fairy tales of the Brothers Grimm.

Whether it is Hansel and Gretel, Rumpelstiltskin or Snow White, the fairy tales of the Brothers Grimm are familiar to almost everyone. Although they were collected and recorded in Germany, the fairy tales have become part of world literature. The Frog Prince is no less popular for being known as Froschkönig, Principe Ranocchio, Roi Grenouille, Rey Rana or Kikkerkoning and the same is true of the other stories’ characters. German photographer Andreas Fechner from Düsseldorf has selected twelve of the stories and created special settings for the 2016 Standox calendar, with cars taking the starring role. 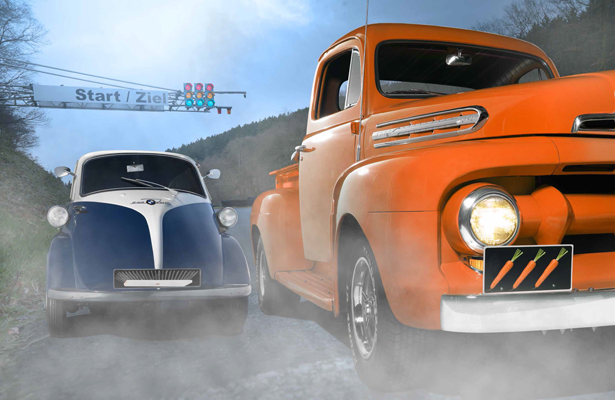 In Fechner’s version of the race between the hedgehog and the hare, an American pickup truck that is practically bursting with engine power competes with a tiny Isetta. Hansel and Gretel are not lured by a gingerbread house, but by the friendly lights of a VW Bulli. To be able to understand some of the references, a little car knowledge is required.

Many of Fechner’s images are complimented by the car’s paintwork. The two beautiful sisters Rose-Red and Snow-White are represented by two Jaguar E-types, painted, of course, in red and white. The wolf thoughtfully gazes at a Mini with a red roof and is clearly thinking of Little Red Riding Hood. And the Frog Prince also puts in an appearance – in the form of a Porsche 911. The car’s silhouette has always been reminiscent of a frog preparing to jump, and this is accentuated when the car is painted in the classic Porsche colour, Condagreen, as it is in Fechner’s photo.

For more than 30 years, Standox has commissioned internationally-renowned photographers to create its wall calendar, which can be ordered from the Standox web shop, www.standoshop.co.uk, in the literature/poster section. System Tools Plus members will automatically receive their free calendar as part of their colour programme update.