Standox, one of the three premium global refinish brands of Axalta Coating Systems, a leading global supplier of liquid and powder coatings, has helped a team of students from the University of Applied Sciences in Vienna, Austria, to paint a racing car they designed for the 2015 Formula Student competition. This is the second consecutive year that Standox has supported the OS.CAR team of students – OS.CAR stands for Old School Car. 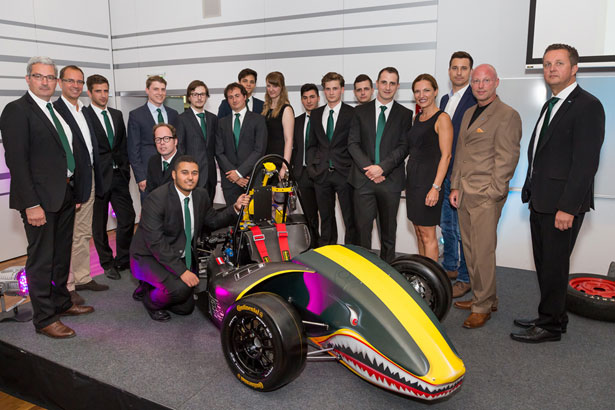 The OS.CAR team car was unveiled at an official presentation on 16 July 2015 at the University and is set to compete against 42 other student teams from around the world between 10 and 13 August 2015 at the Formula OneTM Red Bull Ring in Spielberg, Austria.

Formula Student is a well-established international educational motorsport competition held annually for engineering students and usually forms part of a degree-level project. Within the space of a year, students must design, cost, build, present and enter a single-seat racing car for a series of static and dynamic competitions.

Andreas Auer, Marketing and Business Development Manager for Axalta’s Refinish Systems in Austria, explains how the project first came about: “In 2014, we got in touch with the team of engineering students at Vienna University as they were looking for some paint to undercoat and finish their racing car for the Formula Student competition. With Axalta’s strong experience in motorsport, including Formula OneTM and NASCAR, we of course absolutely loved the idea and went to visit the students. Their presentation was so persuasive, and they were so clearly passionate about the project we decided to partner with them with more than just the coatings.”

The students brought the then-current car, the CR-113, to the Axalta training centre near Vienna. Standox technicians advised and supervised the students as they helped to prep the vehicle for painting, with the technicians completing the job with one of Standox’s highly professional paint systems. The CR-113 successfully passed all technical checks and began competing in August 2014 on the Red Bull Ring in Spielberg, Austria, and made it through to the final round of the competition.

This year, the students were back at the Axalta training centre with the new CR-115 car, called Mako, after the shark. Again the Standox technicians supervised the students with the initial masking and sanding, and then took over the difficult task of painting and airbrushing a menacing-looking shark’s face, mouth and teeth on the front nose of the car.

Karin Franz, Human Resources Manager for Axalta in Austria and Switzerland, says, “The Formula Student competition gives these students the opportunity for real-world engineering experience that will allow them to transition from the university to the workplace. We are delighted to be able to support the OS.CAR team. We wish them every success for this year’s challenge with the new CR-115 car, which looks fantastic.”

Kolja Hosch, Head of Country Human Resources for Axalta in Europe, Middle East and Africa, says, “At Axalta, we are passionate about helping young people develop the skills they will need in their professional life. This cooperation with the Formula Student team brings Axalta and students together to build a mutually beneficial relationship.”

For further information on the OS.CAR racing team, please visit www.campus-racing.at. Details about Formula Student in Austria can be found at HYPERLINK “http://www.fsaustria.at/”www.fsaustria.at, or follow the events on Twitter on @fsaustria.