For the fifth consecutive year Team P R Reilly is continuing its sponsorship with Sligo based rally driver David Quinn as he competes in Class 14 at stages nationwide this year. 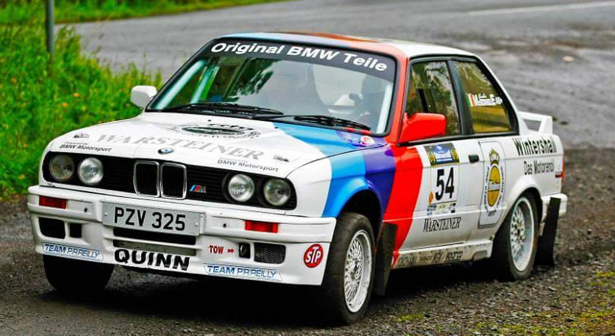 When he’s not on the rally circuit Quinn can be found plying his trade as a mechanic in his native Sligo with Henderson Motorpark. The knowledge he has accumulated from years in the trade has definitely served him well as seen by last year’s Class 14 victory in the Sligo Stages.

Quinn and his BMW E30 is curently getting ready for his next raceat the Midlands stage in Roscommon on Sunday, March 29. Following Roscommon David will be competing at many more stages including Galway Summer, Donegal Harvest and his hometown of Sligo where he will be eager to repeat his success of last year.

Team P R Reilly has a long history of involvement in Irish Motorsport and is delighted to continue its partnership with Quinn. A spokesman for the company said: “David is a great talent in the sport. We feel that he is well placed to build on his achievements of the last few years and are more than happy to play a part in his continued success.”

For more information on Team P R Reilly’s product range and offers contact a member of the sales team at 01 8320006 or sales@team.ie