By Andrew Jackson, Head of Analytics at Glass’s
Much is made of the notional value of colour, whether it is the colour of your neighbour’s garage door or a particularly striking pair of Christmas socks.

Therefore it is surprising that for an industry which is driven by subjectivity and emotion when it comes to making a purchase, there is much in the way of opinion yet little in the way of analysis that indicates the relative popularity and worth of colour in the used car market at the point of sale.

According to DVLA data, around 80% of all vehicles on the road are, in essence, one of five colours: silver, blue, black, red or grey. However this is a false barometer for colour popularity as one can argue that the new car market is force-fed specific colours dictated by the purchasing policies of fleet operators. Therefore, the used car market should be considered a truer reflection of the individual tastes of the motorist relative to that supply when examining premiums which the same vehicles will sell for, when nothing other than colour is taken in to consideration.

All of the vehicles analysed delivered some form of margin when retailed, and it is worth stressing that not all colours are born equal, as evidenced by the lack of shades such as ‘Plum Crazy’ or ‘Top Banana’ from the standard palettes of any executive-segment configurator… However, after studying all of 2013s vehicles traded at auction and linking these through to retail, a number of very interesting patterns emerged.

In order to shed light on the subject, Glass’s has examined the flow of stock through auction to retail throughout 2013. This resulted in a sample of 3,000 vehicles which could be traced from retail back to trade. Vehicles were selected so that the sample reflected the same auction condition (grade 1) age range (2-3 years) and vehicle specification (per segment) in order to ensure that variance caused due to anything other than colour was minimised.

The data presented resolves the value of vehicles by colour, when traded at auction, plus the gross margin before discounts which, when added, equals the last advertised price of the car. The colours were then ordered according to margin to trade value ratio in order to identify which colour returned the largest profit when considering expenditure at trade.

One of the most striking facts that emerged from the sample was the “translation” between what the trade perceives as an attractive vehicle/colour combination and how the buying public responded (in terms of time to sell and gross margin achieved). 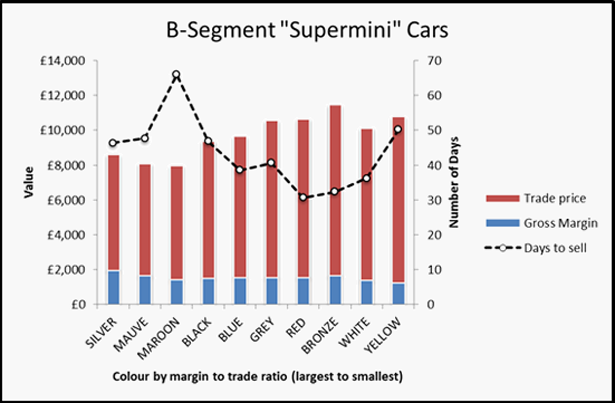 To give an example, we looked at the “B-segment” – which is both highly observed and provides one of the largest varieties of standard colours. The highest performing colours at auction were grey, red, bronze, white and yellow. However, when comparing the relative performances between trade and retail, these five colours returned the lowest margins as a percentage of retail value. By contrast, silver, mauve and maroon all performed very strongly.

Based on this sample, the average B-segment margin was 16%; however for colours such as silver and mauve, margins were over 20%. Combine this with the relatively low trade price and a stock-turn duration in-line with the samples average of 44 days, and these colours not only present good value for money at auction, but also give a healthy profit at retail. 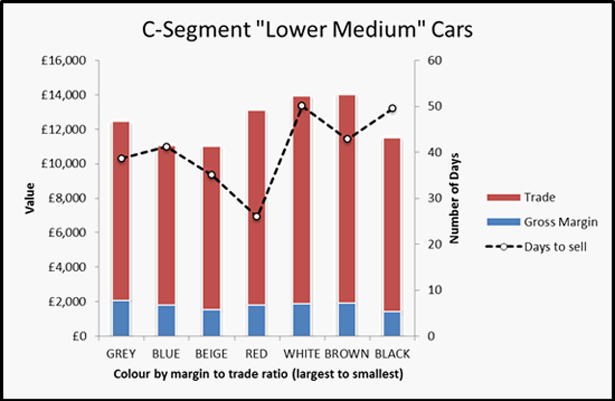 Furthermore, when analysing the “C-segment” two colours stood out: red and white.

In this segment the evidence indicates that red sells well on both sides of the market. This is reflected by a high trade price and low days to sell – a compelling choice even if the margin is reduced. When compared to blue C-segment cars, whilst the margin is very similar and the days to sell in-line with the 40 day average, red sells on average within 26 days and at a slightly higher margin. Therefore, in an idealised 12-month scenario where all values remain constant this, would equate to a 58% uplift in margin if blue vehicles were replaced with red, but it would also demand an eye-watering 91% increase in capital expenditure to maintain stock.

Juxtaposed against this is white which at auction sells very well commanding high prices, yet it takes nearly 10 days longer to sell at retail than the average. Furthermore, due to the inflated trade prices, the margins are squeezed as a result. Similarly yellow, which can be considered to be a youthful and fresh colour, performs well at auction yet takes longer to sell at retail and returns the worst percentage margin of any colour in the sample, indicating that its popularity in the auction house was not necessarily mirrored on the forecourt.

Similar situations were observed throughout all segmentations as well as a key linking factor which may not come as a surprise to many – the issue of metallics. Due to the standardised palette used by the DVLA it is not possible to derive what is metallic. However, individual investigation of the records driving the top performing colours by segment showed that these were metallic/high lustre colours. Similarly, grey preformed, across all segments, very well, as did silver and interestingly brown, which in all cases studied were metallic or pearlescent. Colours which were readily available in non-metallic finishes such as black, white and red all suffered as a consequence.

Therefore as the season to be merry is upon us, retailers could do well to look at the colour options available in the auction house. As a splash of the correct colour on the forecourts could help spread some Christmas cheer for everybody.

Andrew Jackson joined Glass’s in 2013 to head up the analysis team. Andrew is responsible for the statistical analysis on more than five million market observations a year giving him a true picture of trade and retail market trends. His knowledge of the global car industry covers: parts, vehicle manufacturing, sales and consumer trends giving an excellent platform to understand the entire automotive business world and enables Glass’s to provide the depth and quality of research that clients expect.