TRW Automotive Aftermarket’s ground breaking brake pad formulation, DTEC (Dust Reducing Technology) which offers 100 per cent performance but 45 per cent less dust – is now available for 75 per cent of the UK and Ireland vehicle parc, six months ahead of schedule. 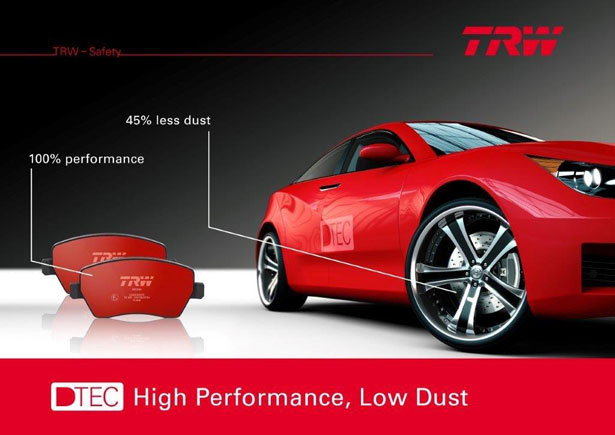 The latest range extension provides references for vehicles such as: Audi A4, A5 and Q7; VW Transporter and BMW 7.

TRW’s UK marketing manager, Kevin Price explained: “When DTEC was launched in 2014 at Automechanika, Frankfurt, the plan was to manufacture TRW’s 150 top moving pads from DTEC formulation by the end of 2015.”

Manufactured by TRW using a premium friction formulation developed in-house, DTEC eliminates the choice drivers traditionally had to make between the high performance of (low) metallic friction material, and the low dust of a ceramic formulation, by offering both.

Tested to meet exacting industry standards, the DTEC range is designed to be aesthetically appealing with a TRW red shim, and is in line with TRW’s key focus on ‘Greener Thinking’.