TRW has used this year’s Automechanika, Frankfurt, as a platform to launch DTEC. Standing for ‘Dust- reducing Technology’, DTEC is a visually appealing brake pad that offers 45 per cent less dust but 100 per cent performance; cleaner wheels without compromise from the leading expert in Automotive safety.

TRW’s Product Group Manager Braking Systems, Richard Adgey, explained: “DTEC eliminates the choice drivers traditionally had to make between the high performance of (low) metallic friction material, and the low dust of a ceramic formulation, by offering both. This is truly an innovation in braking and will change the global friction business for good.” 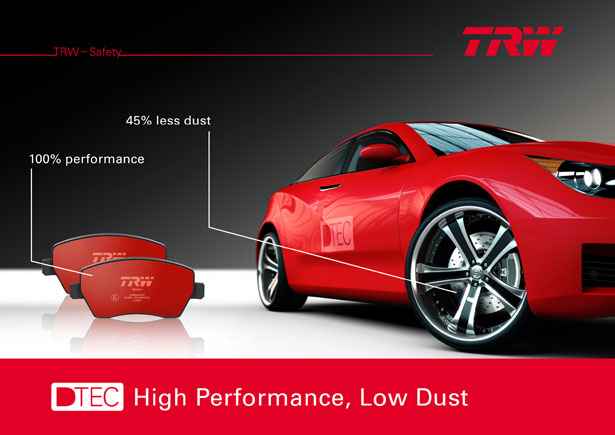 Designed to be aesthetically appealing with a TRW red shim, as well as in line with TRW’s key focus on ‘Greener Thinking’, the initial range will consist of a select number of applications to suit high end vehicles. In line with TRW’s goal of offering the safest, most affordable parts to a global market, the plan is to manufacture TRW’s 150 top moving pads from DTEC formulation by 2015, covering 75 per cent of the European car parc.

“As the leading global supplier of Corner Module – braking, steering & suspension parts and systems, we firmly believe that automotive safety should never be compromised,” Richard continued.

“Our world class engineers have been working on this formulation for some time and are now confident we have a brake pad that offers the highest performance, the safest drive with precision braking – and meets the needs of the discerning driver.”