Although the global automotive industry has been hard hit due to Covid-19, the UK market has suffered severely. British comparison website Scrap Car Comparison has shared the harsh impact on European production, manufacturing and vehicle sales in the automotive industry.

UK vehicle production lines have been shut down for a total number of 41 days so far, the longest closure in Europe alongside Italy.

Currently, the average shutdown duration is 30 working days. The UK has already exceeded this, and has suffered a production loss of 262,715 vehicles.

In comparison, Sweden experienced a production shutdown duration of only 15 days, with 26,464 vehicles not produced. Data shows that Finland experienced the lowest loss in manufacturing across Europe, with only 11,604 cars not produced.

There is currently a projected loss of 2,446,344 vehicles across Europe, including cars, vans, trucks, buses and coaches due to the sudden closure of production plants.

The lockdown impact across Europe 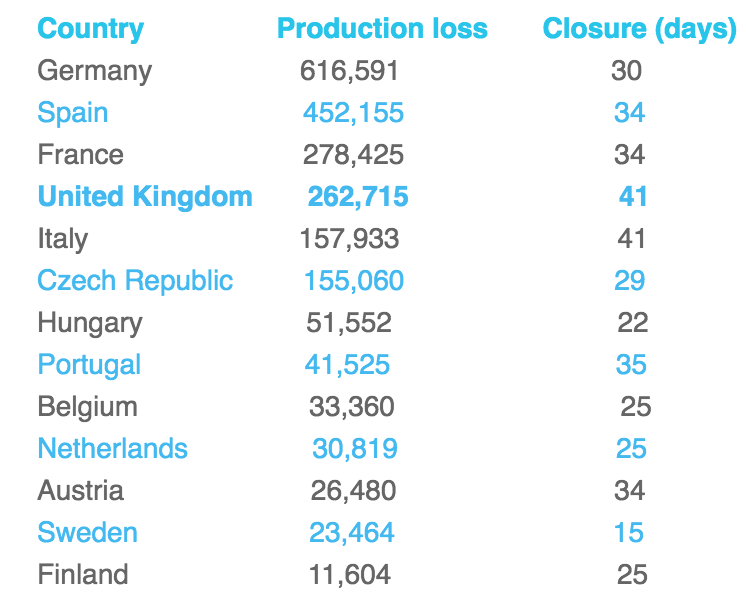 Effects on the automotive industry

Throughout the UK and across Europe, over 13.8 million people work in the automotive industry. From design and production to maintenance and retail, roughly 6.1 per cent of UK and European jobs are based within the automotive sector.

As the production of vehicles came to an abrupt stop, this had a knock-on effect to the car sales market.

The closure of showrooms has impacted sales figures significantly:

Dan Gick, founder and owner of Scrap Car Comparison, said: “In these unprecedented times, it is evident that the global automotive industry has been hit severely. The figures highlight the EU-wide impact of the crisis, we only hope the industry begins to recover as soon as possible.”