The R 230 series from Mercedes-Benz includes among others the SL 55 AMG variant. Since the launch of the almost legendary SL Class in 1957 (!), more than 650,000 units have been handed over in seven model series to customers worldwide up to the end of 2009.

The current SL 55 AMG model has been “modified” with premium foils and an extensive conversion to MOPF II – the second part of the model refinement – by fostla.de, a specialist vehicle foiling company. 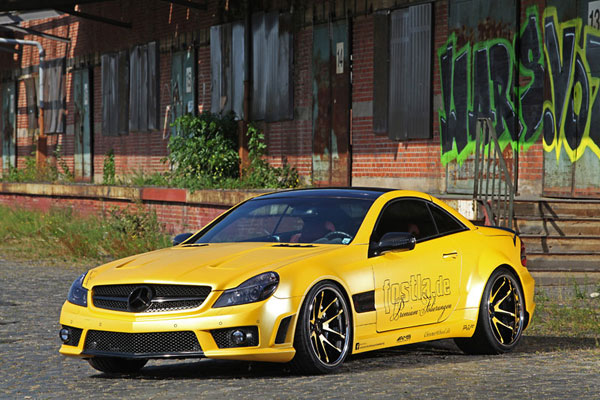 The crew around Darius Wallat has used a wide body aerodynamic kit by PRIOR-Design from their PD-Series named Widebody. An
ingenious system of flowing lines and expressive curves complements an absolutely roadworthy tuning.

The highlight of this conversion is undoubtedly the magnificent full foliation – the main activity of the firm fostla.de – with a PWF foil in
yellow metallic mat. The total cost of this conversion in Germany is approximately 30.000 Euros, but in exchange you will get a unique piece of modern technology.