The Volkswagen Golf was declared the 2013 World Car of the Year at the New York Auto Show today. The seventh-generation has added this global title to the European Car of the Year which it won earlier this month. 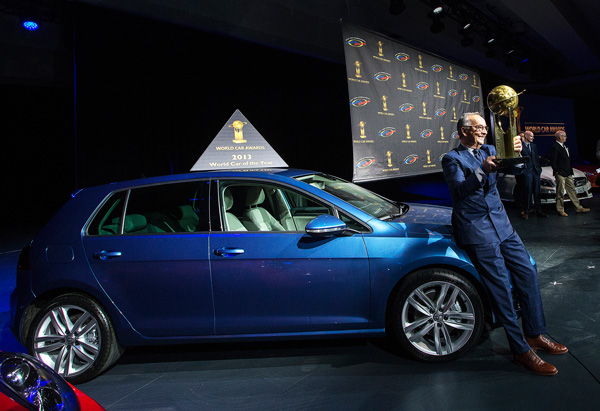 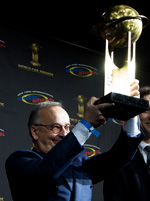 Prof. Dr. Martin Winterkorn, Chairman of the Board of Management of Volkswagen Aktiengesellschaft, said: “We at Volkswagen are all delighted that the Golf has been named ‘World Car of the Year’. To win this award again shows that the Golf is and remains in a class of its own all around the world. This car sets new benchmarks again and again, not least in terms of efficiency and environmental credentials. Soon, for instance, the Golf will also be launched as a plug-in hybrid and as a 100% electric car.”

The World Car Awards jurors observed that, “Honed over seven generations since its original launch in 1974, the Volkswagen Golf is as close to the perfect hatchback design as any car company has come yet. Right sized, but spacious, practical and comfortable inside, the latest Golf has been brought up to date with a fresh if evolutionary design, a range of new engines, plus an impressive list of equipment and safety features. What’s more, it’s fun to drive. If ever there was a car for everyman, the Golf is it.”

To be eligible for the overall World Car award, the candidates must become available for sale on at least two continents during the period beginning January 1, 2012 and ending May 30, 2013.

Vehicles are selected and voted on by an international jury panel comprised of sixty-six (66) top-level automotive journalists from twenty-three (23) countries around the world. Each juror was appointed by the World Car Steering Committee on the basis of his or her expertise, experience, credibility, and influence. Each juror typically drives and evaluates new vehicles on a regular basis as part of their professional work. Through their respective outlets they collectively reach an audience of many millions world-wide.

The Jaguar F-Type was declared the 2013 World Car Design of the Year.

Ian Callum, Director of Design, Jaguar, said: “No design project has given me greater pleasure than the creation of the F-TYPE. It’s a project I’ve looked forward to from the moment I joined Jaguar, and it’s one that’s given my team and I great satisfaction. The F-TYPE is a sports car that is true to Jaguar’s design values – beauty of line and purity of form – and I’m honoured that the World Car of the Year Design jury has recognised our work with this award.”

Meanwhile, the Tesla Model S was chosen from an initial entry list of twenty-one new vehicles from all over the world, then a short list of ten, then three finalists: the Tesla Model S, the Renault Zoe and the Volvo V60 Plug-in Hybrid.

The World Car Design of the Year category, and the corresponding award, is meant to highlight new vehicles with innovation and style that push established boundaries.

It was a long list of hopefuls. Forty-three candidates were eligible for the honour of being the 2013 World Car Design of the Year.