In its past series of stunts Volvo Trucks has invited several extraordinary guests to test the quality of its trucks. Among the guest stars are World Champion slackliner Faith Dickey, Charlie the hamster and now for the season finale a true Hollywood legacy takes the stunt-concept to an entire new level
“What you see is a body crafted to perfection. A pair of legs engineered to defy the laws of physics. And a mindset to master the most epic of splits.” 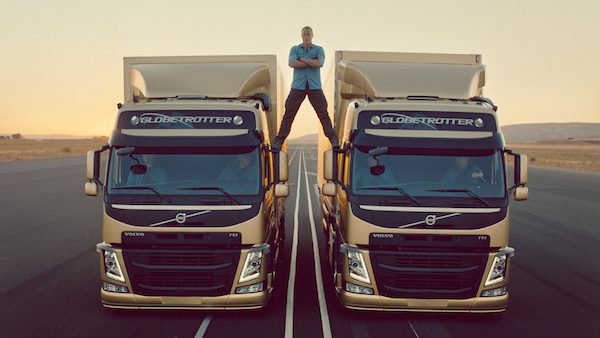 These are the words of fabled action hero Jean-Claude Van Damme. Words pronounced with perfect calmness while he stands high above the ground, a foot on each side mirror of two golden Volvo FM Trucks speeding in reverse. The sun is rising over a deserted landscape. The sky is champagne colored and the music serene. Relaxed in his majestic position, Van Damme performs a world-first: The Epic Split.

“Compared with the previous Volvo Trucks’ films, which have a documentary style, we wanted to make something more poetic,” says Andreas Nilsson, the director behind ‘The Epic Split’. “The film is very clean and simple – there isn’t a lot of information and we just let the stunt illustrate what the trucks can do. It’s like a slow-moving, carefully choreographed modern dance.”

#TheEpicSplit is the sixth live test from Volvo Trucks. It follows on from previous viral hits which all showcase different outstanding features of the majestic vehicles. The purpose of this test is to demonstrate the remarkable stability and precision of Volvo Dynamic Steering.

It was captured in one take without any breaks. Prior to filming, the production team rehearsed for three days, as the final version had to be completed within a 15 minute window when the morning light was just right.
“When I saw the storyboard, I thought it looked amazing. It’s very majestic and very powerful.” said ‘The Muscles from Brussels’ on set at a deserted airfield in Spain, before shooting the scene.

“Not only is ‘The Epic Split’ visually spectacular and exciting to watch, it’s also the perfect illustration of the unique capabilities of the new Volvo FM. If the truck can handle Jean-Claude Van Damme on its side mirrors, it will be able to handle most situations,” says Per Nilsson, Director Public Relations at Volvo Trucks.