The Furniture Clinic based in Durham in the North East of England has completed a unique restoration project with real kerb appeal. 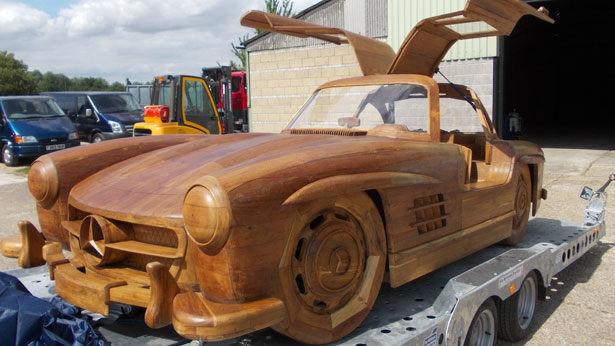 The innovative company was called on to restore an extremely rare and valuable 1:1 scale replica Mercedes Gullwing which was designed and made of wood. It weighs two tonnes and is one of only two believed to exist in the world.

The stunning replica, whose provenance is shrouded in mystery, was painstakingly fashioned from teak to commemorate the famed 1955 Mercedes Gullwing classic car, which commands a £2 to £5million price tag depending on its condition.

The wooden car, which comes with front wheels that can steer, was acquired at the start of the year by car enthusiast Jeremy Harvey who runs a private vehicle hire business based from his home on the Isle of Skye.

He explained: “I spotted the car in a friend’s warehouse and just had to have it as it’s a thing of beauty, but it was drab and dull. It looks more amazing now that it’s been restored. I found Furniture Clinic online when I was looking to have some furniture restored, and found they’d also be able to help with restoration of the Gullwing.

The car looks wonderful now and I’ve been given some polish that I can use whenever the woodwork looks dull.”

He added: “I’ve tried to find out more about the car online but there’s nothing on there about its provenance including why, when and where it was made, although we think it was made in Germany.

It’s a beautiful thing and I’ve been told that the cost of the wood alone runs into the tens of thousands and have had an estimate for the car of around £30,000.

It’s currently in a warehouse in the south of England and friends love to see it. Carpenters have even admired it and have told me what an amazing piece of work it is. I could certainly see it on show at a super car exhibition or maybe owned by a super car enthusiast who might also have the original classic car.”

Ben Staerck, Managing Director, said: “The restoration of the wooden Gullwing has got to be one of our most interesting projects to date. It was an absolute joy to see the woodwork come up as new and we’re delighted with the results.”

The original Mercedes Gullwing has proved popular with classic car enthusiasts, with chat show host Jay Leno having owned one.